It turns out that when actors are filming intimacy scenes, it is the hardest!

Some netizens revealed a tidbit of the crew during the filming. In the shot, the actor wanted to kiss and hug the actress very much in the scene, but when they saw the whole picture of the filming, everyone burst into laughter.

In everyone’s mind, making intimate scenes is a matter of two actors and actresses. We see that those scenes are very romantic, and the actors’ performances are also very involved, but in fact, there is a third person involved: the photographer. 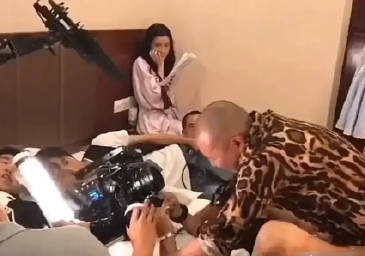 If the two actors share a picture, the photographer will normally control the camera from the side, but in many TV dramas, there are big shots of the actors’ expressions and actions. At this time, the photographer is very embarrassed.

In this type of shooting, the person lying in front of the actor is no longer the opposite actress, but the photographer, because only in this way can the camera in the photographer’s hands be able to shoot the actor’s face, and the actor has to start using his hands. When the feet interact with each other, they are also touching the photographer.

After watching it, everyone said that among the intimate scenes, the photographer was the most difficult one. Not only did he have to do his own job well, but he also had to act as a “tool man” to be bullied, which was really dumbfounding

However, this is a different requirement for actors. Many actors film emotional scenes. In order to participate in the show, they will treat the opponent actor as their true partner, cultivate their relationship every day, and over time, when it comes to filming, two people Naturally a lot.

But to perform some emotional scenes in front of a photographer, without being able to laugh, really requires a lot of acting skills.